Luxor – Go for the unexpected II

Day 1 was dedicated to Karnak temple and Luxor temple. Our guide Ali, originally from Alexandria but with a strong connection to Karnak, showed us around and explained some of the buildings, statues and hieroglyphs, and also left us lots of time to enjoy the atmosphere at the site and to make our own discoveries of favourite spots. Now it was a pleasure that there were so few other tourists around!

The mere size of the constructions is amazing. It is inconceivable how thousands of years back in time such big and massive stones could be moved and worked on with this precision. The quality of the surfaces, cuts and inscriptions is still sublime, even the original colours are quite well maintained in some places. Karnak temple is kind of a group work, supposed to be started around 2100 BC and carried on by more than 30 pharaohs, among them Senusret I , Thutmose III, Hatshepsut, Amenhotep III and Ramesses II. Everybody added on, and so the temple itself is already a trip through different epochs. We also had the feeling that it might already have been an important spiritual site in even former times, before the Egyptian dynasties. The main part of the temple that can be visited today belongs to Amun-Ra. Amun („the hidden one“) and Ra (sun god) merged to this deity, together with goddess Mut and moon god Konshu he formed the Theban triad in the times of the New Kingdom. 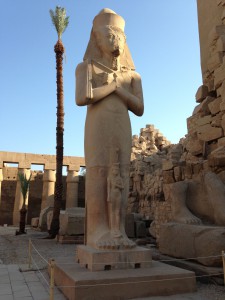 I was touched by the peaceful expression on the face of the giant statue of Ramesses II with his daughter Meritamun. Hatshepsut’s obelisques seem to be like big antenna. In fact we could prove at the top of one that broke and is exhibited lying on its side, that the top vibrates and produces a sound when touched. 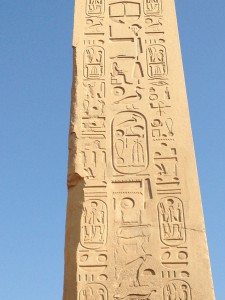 My personal highlight was the small temple for Ptah, the god of darkness (or Creator god, or Father of Fathers), at the western side of the area. In this temple we were admitted to a small room with a statue of Ptah’s spouse, the lion godess Sekmeth. At first it was impossible to see anything, the only light in there came from a small opening in the roof, the eyes had to get used to the darkness little by little. Though I could feel the amazing energy in this room right away, it nearly made me cry. I will give more detailled information about Sekmeth later, here I just want to say that in this temple I had a deep encounter with her energy and came out with the most happy smile on my face!

At Luxor temple I especially liked a room that is called „the birth room“. The hieroglyphs in there tell a story that sounds familiar to us from the bible. Pharaoh Amenhotep III (he reigned aprox. from 1388-1351 BC) explains how his mother Mutemwiya was chosen by the god Amun, because she was the most beautiful of all women. She came from a foreign country and for this reason couldn’t be the rigtheous mother of a pharaoh in the conception of their time (no pure Egyptian blood!). In an act of divine conception Amun came to Mutemwiya in the appearance of her husband, and under the protection of several goddesses the god Khnum formed the body of later Pharao Amenhotep III including his Ka from clay. A similar story had already been told about Hatshepsut some 200 years before, it is shown on a wall in her temple Deir al-Bahari. For her this prove of divine origin (daughter of Amun) was fundamental, because she was one of the few female pharaohs. In the birth room in Luxor temple, as in other inner parts of the temple, the rooms and certain spots on the floor were really emanating a strong energy, it was joyful just to sit there and be silent, connected to old mysteries.