Luxor – Go for the unexpected VI

To finish with this little report on my experience in Egypt, I want to tell you about Sekmeth, the lion goddess. In the Egyptian pantheon several gods have animal heads, Thoth-ibis, Anubis-jackal, Horus-falcon are among the most famous ones. These gods were known in the whole country, but every city had special relations to one or several of them.

Sekmeth was venerated especially in Memphis (along with husband Ptah and son Nefer-Tem), but in Karnak temple there is also a great collection of her statues. Amenhotep III of the 18th Dynasty (1411-1375 BC) created many large statues of Sekmeth in Thebes, probably to show gratefulness for her help in terminating a pestilence. Also Ramesses II thought himself to be born out of Sekmeth. 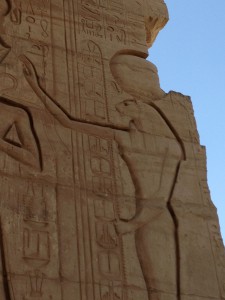 Sekmeth is known as the goddess of war, the one who destroyed mankind. This goes back to a myth that is represented in the tomb of Seti. There was a conspiracy of humans against the Gods. Ra, the king of Gods and men, got very angry and decided together with the counsel of Gods that Sekmeth should manifest on earth and punish the evil-doers. Sekmeth fell into a blood rush and couldn’t stop the killing, until the other gods gave her beer coloured red with ochre from the Elephantine Island that pacified her. This act was later celebrated in apparently quite ecstatic ceremonies for example in Dendera Temple, and that way, to calm down her wildness, Sekmeth also became the representative for the pleasures of love. Others say that Sekmeth transformed into Hathor, the goddess of love, after she was pacified. Their energies are pretty connected anyways. Some people relate this energy with what is known as Kundalini in India. Shakti might be a derivation from the name Sekmeth. In old Egyptian the term sekhem means „power, might“, and there is a modern healing method quite similar to Reiki called „Sekhem healing“ or „All love“, founded by Patrick Zeigler who has a strong connection to Egypt. 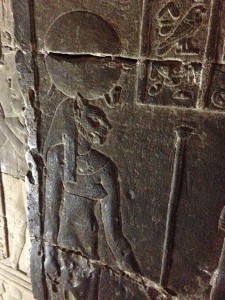 As I mentioned in part II, I was spontaneously and strongly touched by the energy of Sekmeth’s statue in the temple of Ptah in Karnak temple. It never happened to me before that I had such a real and intense energetic encounter with a statue, but well, this is what happened and since then I feel a special relation to this goddess and she became a place in my life. For me it was an energy full of compassion and love, and the wild and happy force of unveiled creativity. Later on I learned that Sekmeth has many more names, and among her titles are also Goddess of medicine, Lady of the Place of the Beginning of Time, One Who Was Before the Gods Were, Great One of Healing, Great one of Magic, At Whose Wish the Arts Were Born, Flaming One, Powerful of Heart, Goddess of Love. I am not against the destructive force as one of the elemental powers, but these names completed for me the feeling I had about her energy. She is much more than the goddess of war. I also like that she is usually represented wearing a sun on her head. 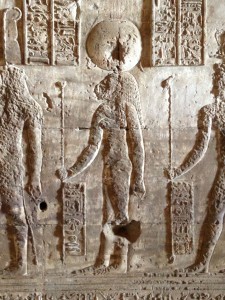 If you feel attracted by this emanation, I recommend you Robert Masters‘ book „The Goddess Sekmeth. Psycho-spiritual Exercises of the Fifth way“. He explains pretty well the historic and traditional dimension of this goddess, and the exercises he proposes (that have little to do with specific Egyptian mythology, in my view) are highly effective to boost the own perception capacities. He also states – a little bit to mystically for my taste – that Sekmeth is a dominant master, and that once you choose her way (or are „seized“ by her as he calls it) you should not follow any other path anymore. Feeling her energy I can understand why he says so, but for myself I have decided that it must be possible to combine, and I enjoy this new energetic teacher and a new facet of my healing connection with the big universal forces.