Luxor – Go for the unexpected III

On the second day we started very early in the morning to the Theban Necropolis, on the other shore of the Nile, traditionally considered the land for the dead. The city of Luxor, known as Thebes in antiquity and Waset for the ancient Egyptians, is on the east shore, Luxor temple and Karnak temple included.

We were the first to arrive in the Valley of the Kings, and the majestic, sand coloured, light mountains made it very easily understandable for me why anyone who believed in a life after death like the Egyptians did would choose this place as the site for resurrection. Dry and barren, but emanating a strong sense of liveliness, in fact I even had the feeling that the gravitational forces were somehow modified in this whole valley. We visited seven of the graves that were open for public that day. In total about 60 graves that date from the New Kingdom (aprox 1550-1100 BC) are discovered yet. But many of them are closed, and in general, at all the ancient sites one often stumbles into closed doors, wondering what might hide behind.

Every grave has its own guardian, usually local men who sit beside the entrance and follow the visitor down the steps inside the tunnel that leads to the grave chamber. No other guides are permitted inside the graves. It was hard to tell if they gave explications out of enthusiasm for their national heritage or in search for Baksheesh, the so typical and ubiquitous tip, but considering the general poverty of the country we tried to tip as much as possible. I promised myself to bring more small bank notes the next time. Taking photos is not allowed in the Valley of the Kings, nonetheless paying Baksheesh it would have been possible. I felt no need to take pictures of these burial sides. Once again it was very surprising how it was managed to carve these very straight tunnels into the mountain, some up to 200 metres long, or how the heavy granite sarcophagi were brought till the bottom of the graves, considering that the tunnels were hardly any broader than the measures of the boxes.

We would have loved to cross the mountain walking to get to Hatshepsut’s temple on the other side, but it had become too hot for this till we finished our visits to the graves. Next time! There is a foot path across the pyramide-shaped peak of al-Qurn, and this mountain is definitly calling! 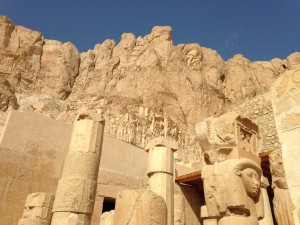 Deir al-Bahari is Hatshepsut’s beautiful legacy, designed by her wesir Senenmut. You can find a nice fictional report of Hatshepsut’s life (1508-1458 BC) in Pauline Gedges‘ novel „Child of the morning“. The temple is constructed right into the mountain and the stones seem to be an integral part of the amazing energy of the place. Unfortunately the Holy of Holies and all the entrances to the parts inside the mountain are blocked. Hatshepsut’s son Thutmose III erased her name and pictures on the walls, but the reconstructed statues on the third floor show her beautiful face with the Pharaoh’s beard attached to her chin to avoid showing at first side that this was a female Pharaoh. There were also some gorgeous statues of goddess Hathor in a sector next to the main temple. 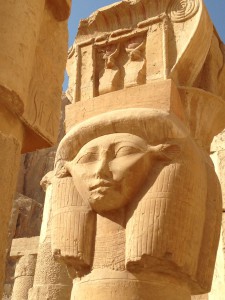 Also in other temples it was irritating to see how later generations censored and destroyed the artwork. It shows how well the representation of power through art worked; if not, one would not have esteemed necessary these destructions. I couldn’t help to wonder how the workers must have felt who had the task to destroy all the many beautiful faces of the big Hathor pillars in Dendera temple. And then of course in colonial times the foreign visitors felt very free to take whatever they wanted. It is said that over 30 obelisques were destroyed in the intent to bring them down and to other countries; the famous zodiac from the ceiling of Dendera temple ended up in the Louvre – the French at least were friendly enough to provide a copy of the original for the temple.

Only later I read that it was in Deir al-Bahari where the horrible Luxor massacre happened in 1997. 62 people were killed by members of an Egyptian Islamist group. Nothing reminds of this there, and it is hard to imagine that anybody could commit such violence at such a peaceful place. 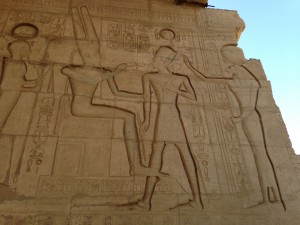 At the Ramesseum close by, the memorial temple of Ramesses II, we could admire the rests of one of the biggest statues of the world, a 19 metre high single piece syenite of the enthroned pharaoh, weighing more than 1000 tons. No one knows how it was destroyed, its parts are spread on an impressive site with view to the mountains of the Valley of Kings. Big picture of the battle of Kadesh on the wall, Ramesses II against the Hittites, and other beautiful illustrations. Hot and tired after walking around a lot. I seldom enjoyed so much a black tea with sugar as the one offered this day by the guards of the site.