Luxor – Go for the unexpected IV

Day 3 was the 21st of December, day of the winter solstice. Only a few years ago it was discovered that Karnak temple is constructed and aligned in a way that during sunrise at winter solstice the sun just climbs up about the central axis of the temple, probably also to bring sunrays to the sanctuary and illuminate the statues of Amun.

We did not know this before, so it was coincidence or providence that helped us to be there for this special occasion – we did not doubt for a second and took the shuttle bus offered by our hotel to be at the temple around 6.15 a.m. The local authorities had organized a folcloristic dance group and music, but just the same it was not too crowded at the entrance bridge to the temple, supposedly the best place to see the sun raise over the Eastern door.

I only want to say about this event that it was one of the most beautiful things I saw in my life, a moment of true union, and I will go for it again. If you feel a calling, try to be there at this time of the year. I am sure you won’t regret it. 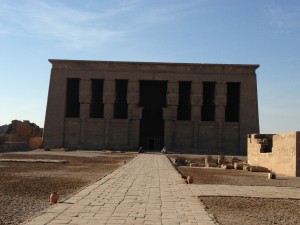 With the happiness of this great start into the day we took the road and our driver Ahmed drove us aprox. 60 kilometres north to Dendera temple, the reign of Hathor, the goddess of love, joy and motherhood. This is one of the best conserved temples in Egypt, the first foundations date from around 2500 BC, but the current structures are from the Ptolomeic period (305-30 BC). It was still early and so once again we started our visit on our own, just Ali, E. and I, exploring the labyrinthine structure of the temple with many tender and expressive hieroglyphs. I perceived a very female and familiar energy, and remembered my midwife and doula friends back home. In one of the upper rooms I sat for several minutes, just enjoying the clearly perceivable pulsation of the big creative force of mother earth. As in other temples, I would have wished to know more about the traditional rites and ceremonies which these places were designed for. There is still so much spirit to be felt, far beyond the awe that the majestic buildings themselves inspire. 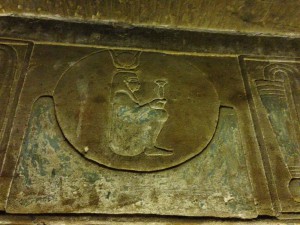 The memorial temple of Seti I in Abydos is considered one of the most ancient and sacred sites of Egypt. It is build on a ground where already the pharaohs of the first dynasties (around 3100 BC) had been buried, and it became the centre of the worship for Isis and Osiris. Behind the temple there is also the so called Osirion temple, flooded during part of the year, the flower of life on one wall. Nearby are the rests of another temple built by Ramesses II, with some very beautiful original colouring, and the inscriptions show his megalomaniac side (he wanted to reign for the next thousands of millions of years). Well, even in lifetime he managed to rule for 65 years, from 1290-1225 BC, not bad at all. He is also called Ramesses the Great. In the village we were the attraction for a group of children. They followed us shouting and laughing, and I thought it fair enough that we tourists who come to do sightseeing become objects of interest for the locals as well. 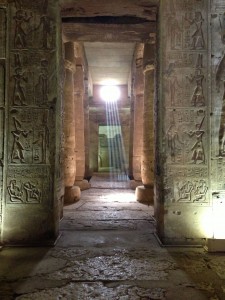